Dominique Grubisa the very model of a modern major plagiarist 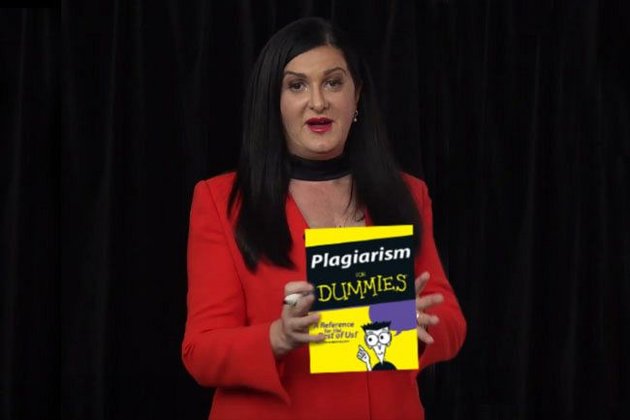 A manual written by self-professed property maven Dominique Grubisa has been largely plagiarised directly from a book penned in 2009. David Donovan exposes this new development in Grubisa's scam.

IN PREVIOUS STORIES, IA has exposed the systematic plagiarism of Dominique Grubisa. Starting with the appropriation of case studies and materials from Singapore-based Jeremy Harbour in relation to her Business Turnaround program, to her booklet, 'Forbidden Knowledge', ripped from a book of that very same name by former U.S. Congressman Robert E Bauman.

Then there was material submitted to the Australian Financial Complaints Authority (AFCA) lifted from a paper written by Griffith University Academic Dr Pelma Rajapaske and the policy documents on her business's website featured in our stories in March and earlier this month.

We have also referred to the strategies promoted in her Real Estate Rescue manual in numerous stories. Now those two worlds of plagiarism and her predatory property strategies converge. Not surprisingly, built on yet more plagiarism.

In a section in Grubisa's Real Estate Rescue manual headed 'What you need to succeed', Grubisa answers the question: 'Why doesn't everyone do this?' [p 41].

Dominique Grubisa's strategies regarding targeting people in financial and relationship distress are put under a privacy microscope.

An easy route? Well, we can think of some other things that are easy. Like plagiarism. But as three academics from the University of Hertfordshire opined in a paper in 2006: 'Plagiarism is easy but also easy to detect.'

This brings us to our latest tale in the work of Mrs Grubisa. The bulk of Grubisa's Real Estate Rescue manual has been plagiarised, this time from the work of Chip Cummings and his 2009 book: Cashing in on pre-foreclosures and short sales: A real estate investor's guide to making a fortune even in a down market. That book was published by John Wiley and Sons in 2009.

The extent of plagiarism is extraordinary.

Grubisa opens her Real Estate Rescue manual with a word of congratulations to the reader, telling her students that she bought her first distressed property when she was in her early 20s and 'it was actually by mistake'. What a coincidence! In the opening words of his book, Cummings tells the reader he bought his first foreclosure property at the age of 19 and it was 'actually by mistake'.

Cummings goes on to explain that just like there are few classes to teach 'our kids' about credit and how to manage their finances, Grubisa says likewise about 'our children'.

Paragraph after paragraph, page after page, the following are lifted from Cummings' book. Cummings' book is lengthier and doesn't go into "take over" strategies that Grubisa promotes, but the plagiarism by Grubisa is extensive and blatant.

How bad is it? Let's again put on the scuba gear and take a deep dive.

On page 24 of his book, Cummings tells us he has developed a 'concise 17-step process of getting pre-foreclosure properties'.

Cummings has outdone Grubisa by one step because what she has developed is a '16-step process' but as generous as Cummings is, she also plans 'to share it with you right down to the very last detail'. What step did Grubisa leave out? Well, closing the deal apparently.

Cummings [p 21] goes on to warn his readers that if they are looking to get rich quick with little to no risk or cash and wish minimal effort, it isn't going to happen. The same advice Grubisa gives her students [p 40]. Both 'hate to burst' the bubble of the reader on that front.

Both Cummings and Grubisa say some of their readers may be sceptical of their chances of success, noting others might try to talk them out of 'this foolishness' [Grubisa p 42, Cummings p 23]. Each asks for sceptics to reserve their opinion until they have 'read the entire book' [Cummings] / 'completed the entire course' [Grubisa].

Both advise the reader to:

Dominique Grubisa is facing consequences for falsely claiming to have patented property software to assist clients.

The reader is told to ask themselves some questions regarding their strengths and weaknesses. These focus on whether people like the reader, whether the reader enjoys talking to people they have never met, to question their listening skills, their capacity to be diplomatic in stressful situations, their capacity at maths and so on. All of Grubisa's questions [p 42] in her manual were lifted straight out of Cummings' book [p76].

That leads to a quiz. At least this time Grubisa [pp 45-46] goes to the effort of reordering the questions put in Cummings book [pp 14-15].

Grubisa and Cummings then go on to the importance of setting goals. Sentence after sentence, paragraph after paragraph in Grubisa's manual again lifted straight out of Cummings' book.

We can't go into every aspect of Grubisa's plagiarism - it is simply too extensive and blatant.

Cummings says [p 75] that in the introduction he promised to tell the reader the truth and says:

Well, Grubisa makes almost identical protestations, changing only the reference to 'foreclosure investing' to 'investing in distressed assets' and changing 'you'll' to 'you will' [p 53].

This is the same Dominique Grubisa banned by the Australian Securities and Investments Commission (ASIC) who described her as having a habit of not telling the truth - in other words, a habitual liar. Of course, the DG Institute has a different take describing Grubisa as 'a consummate professional'.

Clearly, working harder than anyone else doesn't extend to Grubisa not engaging in shocking plagiarism and appropriating large sections of a published work as her own. Because Grubisa's manual is complete with a copyright reference at the bottom of each page. We think it is hard to claim copyright in something you have largely pinched from someone else!

You might wonder how deep the plagiarism goes beyond all this. Here's a selection of notable mentions.

In our first story regarding Grubisa, we referred to how she advises her students to show no mercy - staying clear of discussing how their circumstances were affecting their family, sickness health care bills and so on. Their job being 'to move forward with [their] plan and not engage in family counselling' - the exact words Cummings uses [p 123].

Cummings helpfully tells the reader [p 77] they can order business cards for less than $30 from any office supply store and they can get some for free on the internet at Vistaprint. Grubisa is as reassuring [p 55] about both without reference to that company. Does anyone in Australia call a stationery store "a supply store"?

When it comes to checklists in the Real Estate Rescue manual, Grubisa has again helped herself to those in Cummings' book. Her 'Exterior property checklist' [p 109] lifted word-for-word from Cummings' equivalent [p 154].

Some telling signs of this being lifted from a publication for an audience in the USA include the reference in Grubisa's checklist to 'Condo' and 'Co-op'. No one in Australia (with the possible exception of U.S. ex-pats) would describe their apartment as a "condo" and as for "co-ops", again, a mostly North American thing.

Grubisa [p 94] goes to the rescue of her students telling them they should be aware of serious structural defects, because certain repairs could be quite costly. Quite remarkably, Grubisa gives her students a cost range of between '$5,000 and $10,000 depending on where you live' for a new roof. The exact same price and words were used by Cummings in his 2009 book [p153].

Grubisa has sold her Real Estate Rescue program to many thousands over more than a decade. She claims her expertise in property, debt law and asset protection, yet time after time her materials are shown as being lifted from others. And her plagiarism, false claims, fake reviews, dodgy awards and fake puff pieces have been exposed.

She is very far from being the 'consummate professional' she claims to be as IA has shown time after time.

Dominique Grubisa is so vain, she probably thinks this award is about her

Dominique Grubisa has bragged about a prestigious industry award that is as hollow as her career.